Roy Halladay died yesterday, in a single person plane crash. I had the pleasure of watching him as a member of the great Philadelphia Phillies baseball teams of recent memory. I was so devoted to the team at one point that I followed their entire minor league system through Baseball America during high school. Those were leaner times.

Roy was brought in during the era in which the Phillies were among the best teams in baseball and helped them to win the World Series in 2008. Having been born in Philadelphia, I made a decision during childhood to follow all of their professional sports team. The kind of decision that can have incredible unintended consequences.

Before Roy’s death, I knew about his work ethic. It was legendary. You could not beat Roy to the ballpark. What I did not know was how good a teammate he was. Two stories stand out:

1) Sports Illustrated wanted to do a cover story about the Phillies ‘four aces’ of Cliff Lee, Roy Oswalt, Cole Hamels and Halladay. Roy said no. He would not do it unless the Phillies fifth starter Joe Blanton also appeared on the cover. 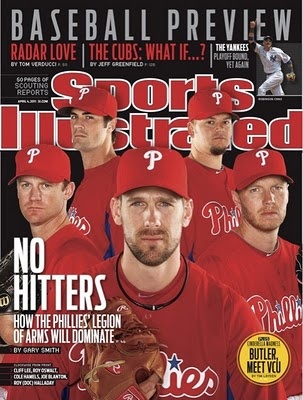 ) On May 29th 2010 Halladay pitched only the 20th perfect game in Major League Baseball History. As a thank you he bought Baume and Mercier watches for 60 members of the Phillies organization. Roy saw pitching, which can be viewed as the ultimate singular activity, as a complete organizationalprocess.

It occurs to me, as we mourn Roy, what an incredible legacy he leaves. His death is helping me to see with much needed clarity. What was originally known as The Bridge Documentary, as can be still seen on our business cards, then became Lost in the Shuffle, while we were shooting in Taicang and is now Double Dummy, would not have come into existence without an incredible team.

I cannot profess to have been as good a teammate as Roy was during his tenure with the Phillies and sometimes the process of making amends seems endless. The good news is the less I try to be special, the more I realize how truly connected we all are.

While playing bridge this afternoon I had an insight. There used to be an insult bandied about in my childhood home, “he’s not playing with a full deck”. A lot of great idioms like this come from playing cards. Roy understood what it means to play with a full deck. He realized that everyone in the Phillies organization played a part in his success.

He also took responsibility for his failures. In a famous text message to then Phillies GM Ruben Amaro, Halladay apologized for a poor start in Game 1 of the 2010 National League Championship Series. “Sorry I did this to you, I apologize.” He had pitched the second MLB postseason no-hitter in his previous start.

I very much hope that if you can join us on Saturday for the festival premiere. It’s corduroy day for those in the know, 11/11. So wear cords! It’s also Armistice Day, which marks the end of WWI. What a fucking great day to premiere this film in my hometown! And if you do and enjoy it, please by all means let the many people who helped make the film in attendance so. And if you hate it, you have nowhere to look but to this author.

Your results in bridge will only get you so far if you are only playing your own hand. Mastery only can come from playing with all the cards.